When you’re starting out as a UI designer, one of the most difficult decisions you’ll have to make is on your toolkit. Just researching the best UI design software takes long enough, and you don’t want to dedicate hours to mastering a program that isn’t suitable for you.

UI design tools help you prototype user interfaces for apps and websites, then share them with clients or co-workers. For a long time, many UI designers simply used Photoshop, but the unspecialized tools didn’t make for an efficient system. Now they have adopted several more UI/UX-focused programs, but the question is, which are best?

We’ve collected some of the best full-featured UI design and prototyping tools, used by responsive web designers to craft stunning interfaces. Knowing what each is focused on, you can pick the ones that fit your workflow.

Our eBook is packed with tips, tricks and tools to build out your website like a professional designer. It lays out an easy-to-read procedure for the entire process.

How to Choose the Right UI/UX Tool

As you’re considering each option, there are some features you’ll want to keep an eye out for. Don’t settle for a simple photo editor. Choose a program that has what you need to craft your interactions. It will act as the key to your catalog of website design services.

As you decide on all of your design systems, remember that some are specialized for wireframing, mock-ups, or full-fledged prototypes, while others can do all three. If you don’t want to use multiple programs, make you choose one that includes the full set of UI design features. 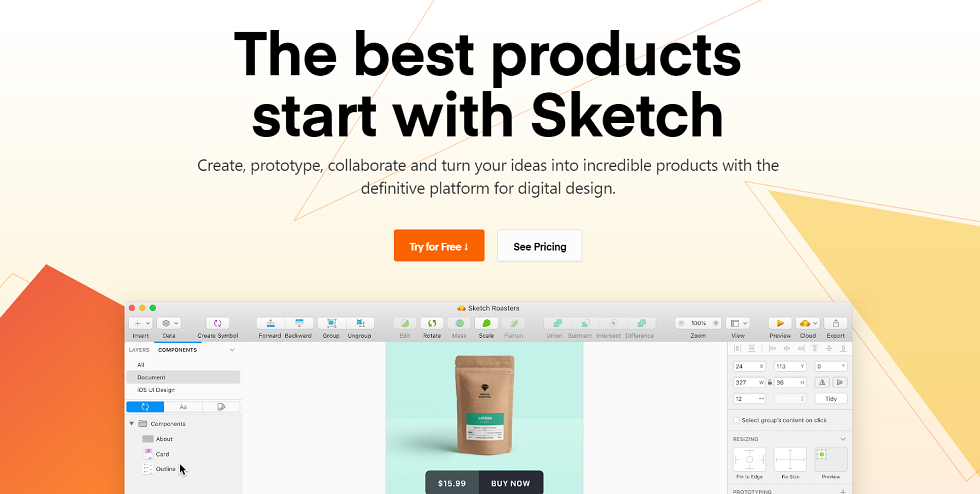 Sketch is many people’s first choice when it comes to graphic and UI design. Sadly the vector editor is only available on Mac, but despite this significant drawback, it’s become the favored tool of the UI design industry.

It’s super lightweight, fairly affordable (especially compared to Photoshop), and alongside a great set of features includes plugin support with plenty of dedicated developers. Everything just works intuitively, and Sketch users love it.

The robust tool has only been expanding lately. In its early days Sketch was only suitable for mockups and perhaps wireframing, and collaboration wasn’t an option. Now you can create animated prototypes using artboards, as well as share your documents with anyone and work with team members while uploading your files to the cloud.

Sketch for Teams is still in beta, and live collaboration is still in the works. There’s a lot in Sketch’s future, so if you choose this tool, you know there will always be a constant stream of new features.

The second big go-to for UI/UX designers is Adobe XD. Made for prototyping and wireframing, the tool is built with collaboration in mind. And if you’re a fan of other Adobe products, it interacts seamlessly with those, with integrations to Photoshop, After Effects, Illustrator, and more.

XD is actually quite affordable, especially if you use it as a standalone product. You don’t need to subscribe to the monthly cloud platform, unlike other Adobe products. You can use it to share a single active document with one other editor for free. If you have a bigger team or more concurrent projects, you’ll be paying a monthly fee.

Adobe XD’s speciality is in interactive wireframing and prototyping, though you can also use it to create mockups and artboards. Much like Sketch it’s meant as an all-in-one solution so you never have to swap programs. 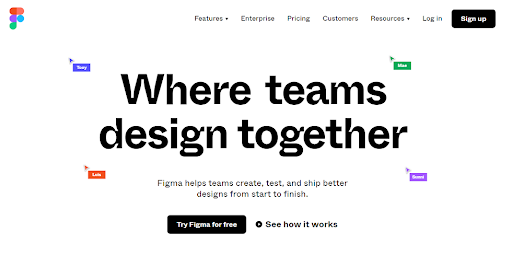 Figma’s biggest focus is collaboration, making it easy for teams to work together. It syncs with the cloud automatically without forcing you to stop and save or upload your work, while you edit alongside your teammates and share files for review. It also allows you to build a reusable design system to speed up team efforts even more.

It’s free to start for up to two editors, including a generous unlimited cloud storage and up to three projects. Since it’s a browser-based app, anyone with a computer can run it — no Mac or Windows restrictions.

Figma is all about the collaborative workflow, so consider this if you’re on a tight-knit design team.

Though it was publicly released only in 2018, Framer X has appeared as a strong contender in the market. The prototyping design tool actually imports and exports from HTML, CSS, and even React. While that’s definitely its coolest feature, it also comes with thousands of components and can create interactive, animated prototypes.

Thanks to its high-tech features, Framer X can create very realistic prototypes with actual interactive elements — not just animations, but things like working media players and input fields. Framer Packages are like plugins for the program, and they’re filled with this kind of interesting content. It’s a glimpse into the future of UI design.

Axure is an insanely powerful prototyping and wireframing tool that includes features like conditional logic, animations, and dynamic content, all code-free and with collaborative sharing included. It might not be the most popular choice, but it’s an underrated gem for serious UI designers who need advanced features.

The all-in-one program has what you need for every step from wireframing to prototyping, and it makes it easy to create rapid designs while allowing you to enliven them with powerful tools. It also includes automated redlining and code export, so developer handoff is simple and painless. 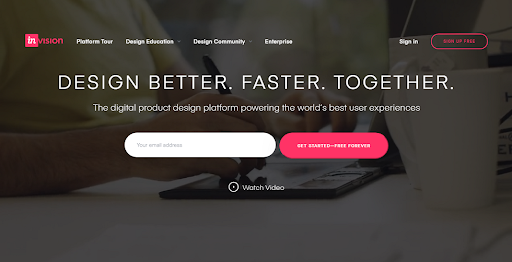 Rapid prototyping has never been simpler. InVision makes quickly creating mockups and presenting them straightforward, with the ability to comment in the app and a freehand tool to draw on or mark parts of the UI. It’s made to keep everything in one place, so you never have to switch platforms to upload files or discuss details with your client.

Collaborating with developers is easy too, thanks to the inspect feature that automatically generates design specs and redlines, plus the focus on collaboration, discussion, and syncing between platforms. Developers will have a great time with this.

Besides all that, InVision is totally free. If you’re a beginning designer who doesn’t have hundreds of dollars to spend on expensive prototyping software, this is a great place to start. 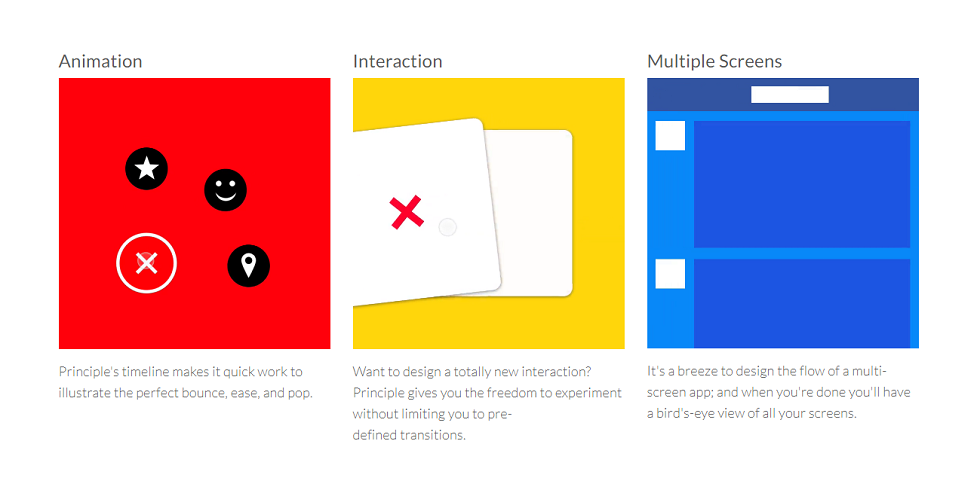 Almost everyone who tries Principle inevitably loves working with it. That’s because it’s based around creating fun interactions and animations, with a super simple interface that you can pick up in minutes. Experimenting with animations is easy, as is exporting the final product for easy sharing.

This is solely an animation prototyping app, rather than one for creating mockups and wireframes, so you’ll likely need to combine it with another tool. But the easy-to-learn animator rounds out your toolkit quite nicely, and it’s a must-have for mobile app creators and any UI designer that works heavily with animation.

Looking for something focused entirely around wireframing? Balsamiq is easy to pick up, even for brand new designers, and it’s also fast. Once you learn it, you’ll be churning out high-quality wireframes in a matter of minutes. You can use it on your desktop or in your browser.

Balsamiq has two modes of wireframing: sketch and clean. The former gets your idea on paper without having to fuss with the pixel-perfect details, great to keep clients focused on the overall design. Clean mode looks better, and you can switch to it with the click of a button.

It’s also easy to share your work with PNG and PDF export, as well as linking to interactive prototypes. This well-rounded program is perfect if you’re searching for a wireframing tool without all the mess of unnecessary icons and functions.

Marvel is the app for everyone. Individuals or big teams, low- or high-fidelity, wireframes, mockups, or prototypes — it’s got it all. It works right in your browser, and you can even try it for free with one project at a time.

This tool was made to be powerful but accessible, with thousands of pre-made assets and a simple UI that beginners can easily get the hang of. And getting user feedback and handing off to developers is a much simpler process; Marvel really is built to cover you ever step of the way.

Want your entire design process all in one flexible app? Try out Marvel. 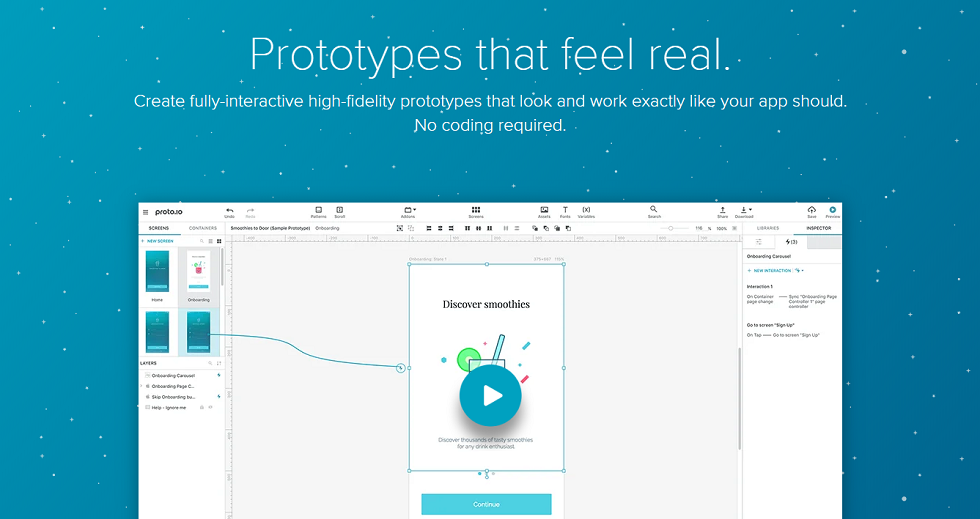 UI prototypes aren’t very often identical to the final product. Sometimes they end up not even looking similar, as exact specifications can be hard to translate. Proto.io was originally made to test out realistic app animations, but now you can create prototypes for almost any device or website.

You can craft your design right in the browser editor, or import from Sketch or Photoshop. Creating animations and transitions is a snap, and the final product looks completely real. Try a demo for yourself; you won’t be able to tell these prototypes from an actual app.

This is a great companion tool for Sketch, or any other UI mockup program of your choice.

It can be difficult to find programs based around app rather than web design. Flinto is all about UI and animations for phones, offering prototyping features like a transition and micro-interaction designer, gesture support, and scrolling effects.

Flinto is only available on Mac, with an iPhone/iPad app for previewing on those devices. It also integrates with Sketch and Figma, and allows you to export recordings to as a video, GIF, or directly to Dribbble.

When creating mobile prototypes, you need a specialized tool. Flinto gives you the features to carefully design animations and gesture effects to perfect your app’s UI.

This powerful all-in-one program is absolutely packed with useful features. Wireframe, mockup, and prototype all in one tool, each stage boasting various impressive tools. States, variables, and conditional logic; real-time collaboration, sharing, and user testing too.

While it takes some time to learn the ins and outs of UXPin, the documentation, video tutorials, and even free ebooks available make the learning curve much easier to beat. This might not be the best choice if you don’t have time to dedicate a while to teaching yourself such a feature-rich design tool, but if you can master it, the results are well worth it.

Good or bad, UI leaves a huge impression on users. It can draw them in with carefully crafted interactions or turn them away if they have a bad experience. Whether you’re creating stunning lead generation websites or designing awesome apps, you need to use the best tools available to you so you can get it right.

Every one of these programs has something unique to offer, and the best way to figure out which is right for you is to test it out yourself. Choose a few that stand out to you and download their free trial, or look up videos of them in action. Then you can get to work mastering the program that will accompany you through your career as a UI designer.

Don’t forget that an optimized UI design toolkit doesn’t only include software, but knowledge, too.  For some additional information that can help you along your career path, check out this UI designer hiring guide at Toptal.com.

Take a PDF copy of our Inbound Marketing Playbook with you to read on the go.

We are the leading  WordPress development and HubSpot Inbound Consulting agency in the D.C. area, working with brands to attract and retain clients by leveraging web technologies and inbound marketing methodologies.

Don't be shy, drop us a line. Whether you are aiming to launch a new website yourself or want to hire a team of experts to build a custom site, we'd love to hear from you.